“Oh how brave you are as a guide”

A few years ago I was guiding some clients on a multi-pitch route on The Penon, Costa Blanca. I was moving independently so I could observe them whilst allowing them to climb and place gear. What I did not expect to see, was them completely strip “my belay” leaving me solo. At least I was on a large ledge, however, it didnt stop me from holding on with a vice like grip.

At the time as I was watching, I could have shouted over and stopped them, perhaps I should have, but the teaching point of “think before you act” would have been lost. There was actually very minimum risk so I took the hit and stayed silent.

When I pointed out what they had just done, their response was brilliant and totally unfounded. They said “It must be great being you, being totally unafraid of heights”.
I had to think hard about my response, because their perception of me is totally inaccurate. Put me on a 10m ladder or up some wobbly scaffolding and you’ll see me scared, but a 280 metre rock face with an almost zero risk of a fall is my comfy office chair.
This is what I said in return…
Imagine a trainee fire fighter, the first time he goes into a burning building with a respirator on. It is going to be an almost overwhelming experience, but once they are seasoned and been doing it for some time, the experience becomes less overwhelming and they can operate more efficiently, safely and slicker.
They would also have a greater understanding of the risks and more confidence in their procedures and equipment. So does this mean an experienced fire fighter is unafraid of fire? I suspect not and I’m just as scared of hitting the ground as everybody else.
Their response to my explanation after the event changed their thinking enormously, it created a thought process with every act having a consequence and therefore worth understanding before being carried out. Their acts, particularly on belays, became slower than before, but their over all time decreased as they became “slicker” and more confident in their actions. 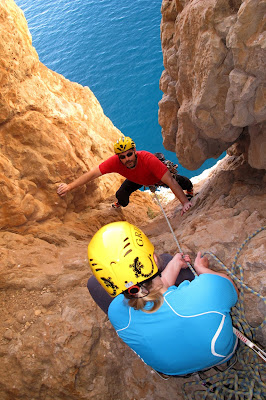 Indoor climbing has exploded over the last 20 years and the numbers of people using walls like gyms for fitness has also exploded. A proportion of these new indoorers are quite naturally moving into “the real world” and touching rock for the first time.

A great opportunity for an instructor for sure, but all is not that easy. With questions like; What colour would this route be at my local wall? Why are the bolts 2 metres apart surely that’s dangerous? Which holds can I use on this route? These are genuine questions I have had.
Other issues that are really off putting for these folk;

Wind. There is no air movement indoors.

The sudden view moving above trees or over the top of a feature.

The route lengths that break the glass ceiling of their indoor wall height, all really strange things to try and coach people through. 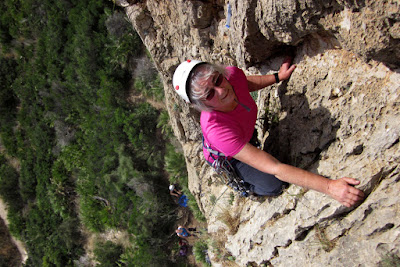 This year is my 30th year of instructing and coaching rock climbing, the situations can potentially be very serious, I’ve come to expect the random and irrational acts of people, I’ve been scared, intimidated and confused, suffered frost nip twice and heat stoke once, caught malaria and been severely emaciated.
But when asked do I still enjoy it, or if I could ,could I change anything? The reply is always, “ No way, what a rush!” Being an instructor/coach isn’t really a job, it’s an adventure!